The Sanders family arrived from Scotland and began carving this farm out of the forest beginning in 1832.  In 1974, I was 23 years old and I was looking for a way to stay close to home, close to nature, in the beautiful Eastern Townships where my ancestors had been farming for 200 years. I was happy to buy the farm from the last remaining member of the Sanders family.

Like many young people I was also looking for a way to contribute to society. Having travelled abroad, I had seen the damage our modern agricultural practices were having on fragile tropical eco-systems. Here in North America, there was a burgeoning movement of people looking for ways to grow food without chemicals and without harming the environment.

I had no agricultural experience but I owned some land and was soon joined by Thérèse Shaheen who shared my dream. We began to work. Along with others, we found ways of growing food with soil-conserving methods and without chemicals. This was a long process of trial and error including many years of little or no income while we learned the hard way.

Soon, marketing produce became the challenge, as the demand for organic food was slow to develop in Quebec. We have always continued to sell our produce locally, but eventually through an organic farmer’s co-op based in Vermont, we began to ship a lot of our vegetables to Boston and New York where the demand was stronger.

Today 40 years and 4 children later, we have a viable organic farm producing healthy food 52 weeks a year and employing many people. We are surrounded by dynamic organic farms producing fruit, vegetables, cereal grains and beans, meat, dairy and cheeses. These farms are becoming pillars of a new sustainable economy providing jobs and income for our local communities. Some of these farmers began as apprentices or employees at Sanders Farm. We want to thank them and our loyal customers for a long history of support and collaboration.

Looking ahead, population growth and climate change will challenge all of us trying to feed the world. Topsoil and water will become scarce and the ability to conserve both will become all-important. Please support efforts, local and abroad, which are trying to build a viable future for our children. 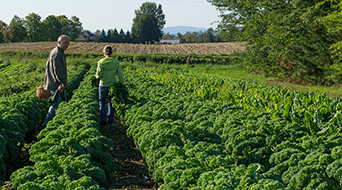 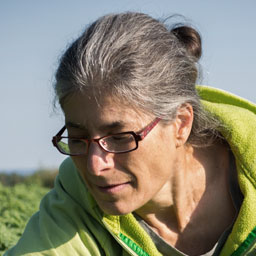 Originally from Longueuil, Thérèse studied science at the Cegep Edouard- Montpetit. She graduated as a dance teacher at the Ecole Des Ballets Jazz de Montréal. In 1976, she moved to the Eastern Townships to be closer to nature and to teach and share her passion for dance. Meeting Russell in 1980, she helped organize the first fall harvest day at the farm and then soon became an integral part of its operation. After visiting and apprenticing on biodynamic and organic farms in France and Belgium with Russell in 1981, Thérèse dedicated herself to the organic farm movement and Waldorf education.

Mother of four beautiful children, wife of Russell, she is the secret ingredient in the success of Sanders Farm. 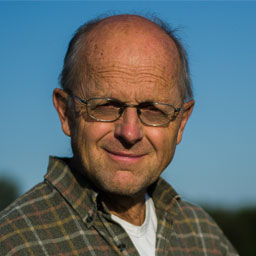 Russell grew up nearby in Waterville, not on a farm even though his grandparents were farmers. In the early 1970’s, he attended Bishops University and became sensitive to environmental issues. He worked for Katimavik and Canada World Youth as project coordinator. He then embarked upon his dream of having a viable organic vegetable farm. He became a pioneer of the organic movement in the Townships and he was one of the founders of Les Agriculteurs Ecologistes de l’Estrie and OCIA Estrie (organic crop improvement association).

Father of four children with Thérèse, he tries hard to keep up with her, both in the field and on the dance floor.